Nagoya is about an hour away from our home base at Kyoto by shinkansen. And judging by the time we normally wake up in the morning, plus the time it takes us to actually get ready for going out, I had a feeling that it was going to be another long day.

Once again, we took advantage of the JR Pass by hopping on a train from Kyoto to Nagoya. From Nagoya station though, we had to take a local train bound for Kinjofuto station on the Aonami line. Kinjofuto is the last station and walking distance from Kinjofuto is Japan Railway’s SCMAGLEV and Railway Park. It left me scratching my head as to why a JR park would not be outside a JR station, but it is what it is. The important thing is that we made it to the SCMAGLEV and Railway Park. Despite the drizzling weather outside, the trip had been a very educational and enjoyable one. Entry to the park is a considerable amount, but it’s worth every Yen.

This is one of JR’s three museums across Japan. The SCMAGLEV catering more to the high speed trains and its evolution. Inside are actual trains like steam locomotives, bullet trains (shinkansen) and of course, the latest in high speed rail transit, the maglev (magnetic levitating trains). I’m a car guy, so trains didn’t really interest me when I was growing up. I only started understanding and appreciating trains when Matthew was growing up and we started to have a growing system of Tomica Plarail sets. When I set foot inside the museum though, everything changed. The history of Japan’s railway system is phenomenal. Yes, I have not seen any other railway system apart from Singapore’s MRTs, but this museum immediately rips open your brain and stuffs it with trains and tracks and more trains. 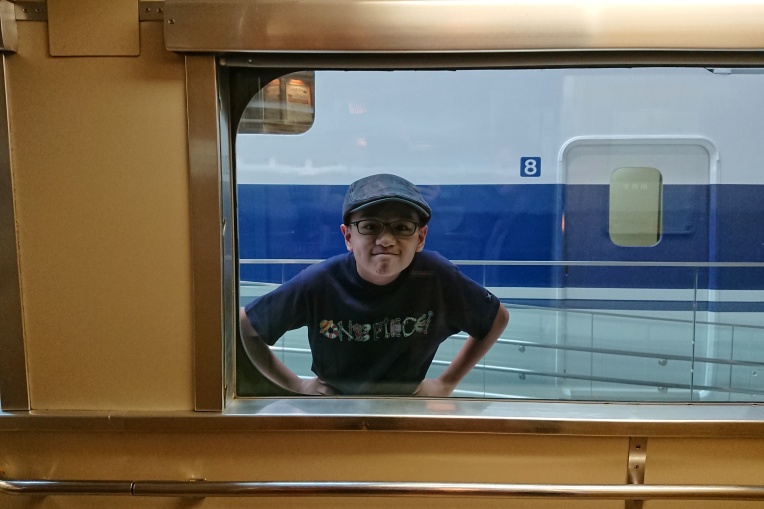 We actually had lots of fun entering the trains whenever possible. There are trains that seem to transport you to the time that it was actually running. The complicated-looking controls were intimidating, especially on the older trains where you only rely on analog gauges to judge your speed and braking distance. As you progress along the timeline of the trains, you get to see the evolution of Japan’s shinkansen. The bullet train if you will. And memories of an old toy came to mind. A ‘0’ (zero) series bullet train. I remember the face of it clearly with that rounded nose, blue and white colorway and the unmistakable bullet-like silhouette. I was in love again. Matthew, overwhelmed with all the things that he is seeing seems to be lost in thought. You can see how ecstatic he is whenever he discovers something new, like the camera underneath the trains showing the bogeys and then the pantographs on the roofs of the trains. And then there are the cutaway bits that show even more parts in close up. It was also amazing finding out how much I actually knew about trains. Well, theoretically anyway, based on things that I have read in books, magazines and the Internet. It’s always fun to share knowledge with Matthew because he always takes it in like a sponge. The downside though is that when all the information that I have has already been sucked dry by him and he still asks for more. I do my best not to tell him to just Google it and point him to actual sources of information like books and people who know what they are talking about. Yes, those sources are scarce and sometimes inaccessible, but you do find them if you look hard enough.

One of the highlights of the museum that we really enjoyed was the enormous diorama built around Tokyo, Nagoya and Osaka. We managed to catch the show, which lasted some 10 minutes cycling from morning to night. It was really awe inspiring seeing trains and cars and other vehicles zooming about and bringing the cities to life. It almost makes me want to build one for myself, and we might. At least with Pla-rail. There was also a train driving simulator where the goal is to reach each station within the allotted schedule. And knowing how incredibly accurate Japan’s train schedules are, I knew it was going to be a challenge. I wasn’t wrong. I would have had a better chance of winning at Forza Motorsport. Matthew had a go as well with better-than-me results. I guess the last highlight for Matthew was the trip to the museum shop. Oh yes, our trips would not be complete if we did not drop by the museum shops. We didn’t mind having spent half a day at the Railway Park. In fact, we should have probably arrived earlier and spent more time there as Matthew really enjoyed the place, and so did we.